Addressing The Role Of Research In Perpetuating Gender Stereotypes 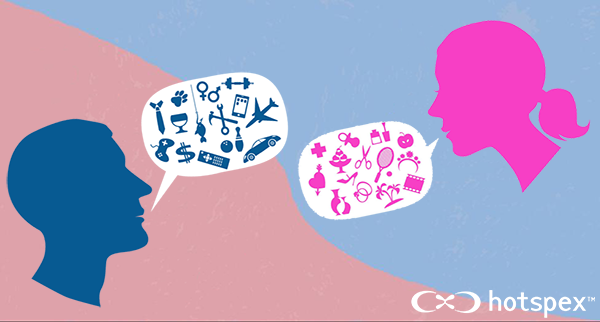 Bias exists. This is unmistakable. Further, that bias is often hidden and exists in even the most well-intentioned and fair-minded individuals. Behavioral science has demonstrated the insidious effects of repeated casual exposure to stereotypes across all walks of life. This manifests across many different areas ranging from implicit racial bias to body-shape bias to gender bias.

As we head into International Women’s Day 2020, Hotspex wants to take a moment to discuss one of the changes we are embracing to focus on gender bias: we are removing the measurement of “masculine” and “feminine” as descriptors from our research.

First, some background on our role and why we measured “masculine” and “feminine” in the first place.

More than a decade ago, Hotspex tackled the goal of developing a comprehensive understanding of emotion and personality. Where many philosophers and psychologists had built conceptual frameworks and then lists of emotions, we started from the ground up in a data-driven exercise. We asked respondents for the feelings and personality attributes that they would potentially utilize, and then used that data to generate our tools that cover the entirety of the emotional spectrum. This bottom-up approach ensured that we didn’t overlook associations that existed in the real world. Our models were reflections of what existed.

Unfortunately, that means that some stereotypes emerged. Masculine and feminine are two examples. Society has generally associated masculinity with also being tough, brave, confident, and a leader. Meanwhile, femininity was associated with being nurturing, loving, calm, and sentimental. Of course, masculinity and femininity were also inextricably linked to the gender roles of males and females. Our models accurately captured the bias that was inherent in the collective view of gender roles.

Over the years, the understanding of gender has progressed, and it is now generally (though not universally) accepted that although those associations exist, they are not necessarily healthy.

The degree to which that view manifests in individuals varies, but in some, it is a very firmly held view. It has been an extremely polarizing issue.

So, what’s our view? We wanted to be both thoughtful and responsible in how we dealt with this issue.

After reviewing tens of thousands of interviews, we have data-driven insights on the need (or rather lack of need) to measure masculine and feminine as attributes. Further, as a company with inclusivity as one of our core values, we have a responsibility to not be part of the problem.

At best, masculine and feminine are both double-barreled attributes. They confound personality and emotional characteristics with gender-based evaluations. As researchers, we are better served to split those into their component attributes and to measure them separately. The analysis supports this. In our review, we found that we could predict over 90% of the variance in both masculine and feminine by using the component attributes alone. This means that measuring the gendered attributes adds no practical benefit to providing insight.

Next, it is certain that there are a number of interviews where individuals see “feminine” or “masculine” shown next to the “related” attributes and react with outrage because they recognize the implicit stereotyping of gender that is occurring. As our collective understanding of gender roles and stereotyping continues to evolve, we would expect this outrage to increase over time, and rightfully so.

These data points lead us to a simple conclusion: using masculine and feminine attributes in consumer research risks harming your results with minimal upside for insights.

Finally, and most importantly – we don’t want to be part of the problem. As marketers, our decisions often influence the conversations in society in subtle and often unseen ways. It would be easier to keep conducting our research like we always have. However, by making this change, we hope to reduce our unintended contributions to the nudges that lock us into a bi-gendered stereotyping world. If that leads to awkward conversations, then we are happy and eager to have them.